Since making my diary (now blog) much more public, I had a request from a relative to share more of our day-to-day experiences here in Japan so here it goes…

Well the best place to start is probably with out apartment. We live in a town called Makuhari, in a relatively new part called Baytown. It is made up of apartment blocks called ‘Patios’ placed in a grid like fashion. Our block is 13 and like most Patios it is rectangular shape with a communal centre. The higher the number, the newer the building.  Here’s ours:

My work has given us a spacious three bedroom apartment which is much larger than we anticipated. Japanese flats are notoriously small and compact so we were pleasantly surprised by the size. It was barely furnished when we arrived but slowly over the past year and a half we have started to make it our own without accumulating anything more than what we need. Eventually when we leave we will have to get rid of the stuff we have bought, which is much harder than you think. There is no local tip, and second-hand stores  are a relatively new thing in Japan like the chain store called Book Off or a rare independent store in Tokyo. You have to pay to remove anything larger than the bin or pay to have it shipped home and so we only buy things that we need, or things we really REALLY want. 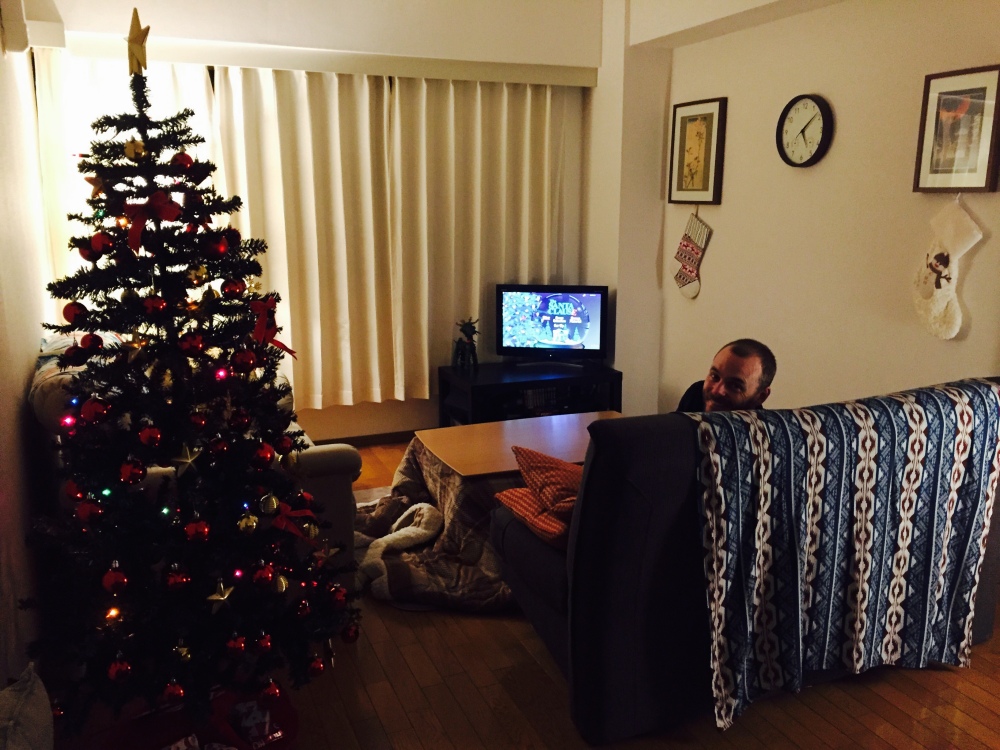 Not only were we surprised by the size, we were even more surprised by the gadgets. As you can imagine, the toilet has all the buttons (and washing options!) you would expect from a Japanese lavatory, including a heated toilet seat! Our hot water is controlled by an electronic panel that talks to you when you alter the temperature and controls the bath water – guaranteeing the right temperature and volume every time. The bath and shower are both in a ‘shower room’ which can be partitioned off and is completely waterproof. What I love about this room, is that it has a roof heater so in the winter, you can heat the shower area up before you get in and its a great place to dry your clothes! None of which we had at home.

Now my favourite part of living here, is that I am only a ten minute bike ride to school on my Mary Poppins two-wheeler! The school I work at is an international school that is relatively new, only seven years old. Even though it is an international school, it has a very unique set up. It is what we call an article one school which means that it is effectively a Japanese school following the Japanese curriculum but it is taught in English and by international staff. The objectives are called MEXT objectives and not only are the skills we need to teach clearly stated and explicitly followed but the numbers of hours spent teaching them is too.

The Japanese education system runs differently to that in the UK. Parents can choose to send their children to kindergarten from the ages of 3 to 6. If they choose to go then they graduate from kindergarten (with an actual graduating ceremony) to elementary school at the age of 6. Once completing six compulsory years at elementary they graduate (yes, with another more serious graduation ceremony) before attending their chosen junior high school at the age of 12. They must legally complete a further three years at junior high school before their compulsory education is complete but most children will move onto high school and then university as it is much easier than trying to find work.

Working in the private sector, I get a rare insight into what happens when the children choose to follow the private school path through to university. Over the years the number of children from our school attending juku has risen dramatically. Juku is an after school tutoring service that specialises in preparing for private junior high school and high school entrance exams. Children can attend from grade 1 (age 6) but most children start going in grade 4. They start with two nights a week, going up to three nights a week when they move up to grade 5 and then in grade 6 it could be every night of the week or 4 nights and a Saturday. When I was teaching grade 6, the average child was working 6 hours at school, a further 5 hours at juku followed by 2 hours of homework a day when leading up to their entrance exams. They were shattered and some days I had children coming in late because they had to finish their juku homework before coming to school in the morning after they had fallen asleep doing it the night before. They were doing 13 hour days studying and surviving on 6 hours sleep at most.

When I left to come to Japan, the government were constantly comparing the British education system to those in the far east. Their observations that the children in countries such as Singapore and China, etc…  are at a much higher level than children of the same age at home is true from what I can see. My grade 6 class were doing GCSE level work! However what are they giving up in return? With Juku, longer school terms, summer school and school on a Saturday once they reach junior high school, it is not something I think would work in Britain.

At school, I am currently teaching grade 4 and I really enjoy it. They are the perfect age, old enough to be responsible but still young enough to be pre-teenage angst. My classroom is located in the media centre where all the classes are designed to be closed off or open plan depending on the teacher’s preference. The walls are all exposed wood which was a little strange but allows for an unbelievable amount of display space. Unfortunately all displays have to follow a strict display policy, which pretty much goes against all my creativity and anything I was taught by the display master, Mrs Joan Jones. Just so you can see, here is a picture of my classroom (I have tried to rebel a little where I can :).)

If you’re like me then you will look at the yellow cushions on the chairs and think… ‘Wow they’re lucky.’ But they are actually earthquake hats. Twice a year we have an earthquake drill where we practise what would happen if there was an earthquake and a tsunami warning. Firstly the children have to get under the table as I go round opening windows and grabbing my earthquake helmet. After the initial quake has settled, we must then exit the building with the earthquake cushions on the children’s head and line up on the field to register. If there is any threat of a tsunami we must evacuate to the nearest high-rise building which we practise during the drill. It is really important and it brings home to you just how much responsibility you have each day when the parents drop their children off to you each morning. It’s scary and daunting but there is one positive side to it all; watching those children who’ve developed a little bit of an attitude, walk down the street in public with a cushion on their head can be very amusing.

As I said earlier, my classroom is located in the media centre which has a full library of picture, chapter and non-fiction books in both Japanese and English. Each class has a designated library lesson in their timetable where the children get to choose books to take home and then find a cosy spot on the sofas or on bean bags to read just for enjoyment. It is such a fantastic space and my favourite part of the school.

Well that’s my school so now for Makuhari itself. It is a lot like Bury, our home back in England. There are a wide variety of restaurants and shops to explore on a quiet weekend with plenty of coffee shops and an outlet mall to pass the time. And because eating out is so much cheaper here, we’ve got a few favourite restaurants. There’s a couple of Italians which are delicious but we are a huge fan of Yakiniku, otherwise known as Korean BBQ. For those who have no idea what it is (like us when we arrived) it’s where you sit around a table that has a BBQ grill in the middle. You order raw meat, fish or vegetables and cook it yourselves… Amazing!! Oh and don’t forget sushi row where you can eat nearly 15 plates and it costs you less than £10!! 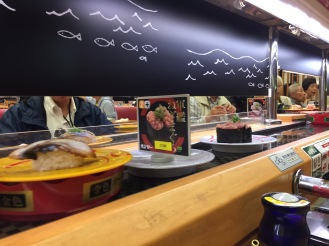 As well as restaurants and shops there is a British Pub that we often go to after work at the end of the week. It sells beer and alcohol and serves food but it is about as British as a dry summer. Firstly, you are shown to your seat, you have to stand in a single queue to order and you can’t drink at the bar. Unfortunately smoking is still allowed there too which means Fabreeze is well and truly being kept in business with the amount of de-smoking we have to do. However, all that said, a pint-sized Malibu and coke only costs £2.

So that’s where we live and where I work, so what is it like to live in Japan? Well it has its positives and negatives like any home and we love so much about living here but the language is still a challenge.

Now don’t get me wrong, we’ve mastered the art of ordering food, going to the shop and Rob is an expert at the post office but this is assuming that everything goes to plan. That all the food you’ve ordered turns up or the clothing you’ve bought doesn’t need returning. It’s when things don’t go to plan that it becomes difficult and uncomfortable. First you are bombarded with words you didn’t expect or don’t understand. You ask them to repeat it (Moichido onegaimasu) and then panic sets in and all you can do is pull the face. The stretched mouth and clenched teeth that clearly shows you don’t understand. But alas, they don’t see it. You then move on to… Wakarimasen (I don’t understand). Now they look uncomfortable. They don’t know English and why should they? You have chosen to live in Japan, you should have a better grasp of language by now surely but shamefully it is still not good enough, so now you feel even more uncomfortable and responsible for the joint awkwardness. They resort to pointing and choosing the odd Japanese word for their own comfort and you finally reach an understanding and so you leave achieving your goal but with absolute no desire to return because of the embarrassment. This is pretty much the routine and luckily the people are kind and friendly. So many Japanese people are willing to go out of their way to help you, even if it puts them out. They are a nation of people who do not like confrontation and follow the rules. Unfortunately they also like to stand uncomfortably close to you too. It appears that the average radius distance for what is considered acceptable personal space is much bigger in Britain than in Japan . They truly are some of the nicest people but their ability to gauge the size of a gap without bumping into you or touching you is shocking! Something my husband is finding increasingly difficult on his train journeys into Tokyo!

So this is just a small insight into our life here in Japan. Really this blog could have gone on for another 2000 words, speaking about Amazon Japan and its amazing cash on delivery service, or the stationary gold mine that is the 100 yen shop or even the pet mall that sells bridesmaid dresses for dogs and a doggy swimming pool, but I’ll save that for later.