After a short 2hr 30min flight from Bangkok, we arrived in Singapore. Straight away there was a clear difference in the feel of the place. Immigration was slower but seeing more food and drink from home was a pleasant surprise.

Immigration was so slow that when we finally got through, our luggage was off the baggage conveyor belt and stored neatly to the side. We collected them and headed towards the taxi rank. On the way I spotted a sign for an airport shuttle. Intrigued I explored and discovered that for a mere 9 Singapore dollars each, we could get a shared mini bus straight to our hotel front door. Bargain!

We chose to stay at a simple hotel called Destination Singapore Beach Road which used to be a Premier Inn. Singapore was our most expensive stop so we had to weigh up where we wanted our money to go… a nice hotel or Universal unlimited express tickets. For Rob it was a no contest. At the end of the day, we simply wanted a clean place to rest our heads at night and enjoy more of the sights.

It turns out that our hotel was on Beach Road closely located to Haji Lane which is full of fun restaurants, bars and shops. You could find food from almost all over the world here, from Mexican, Lebanese to Japanese, etc… so it had a very multicultural feel. 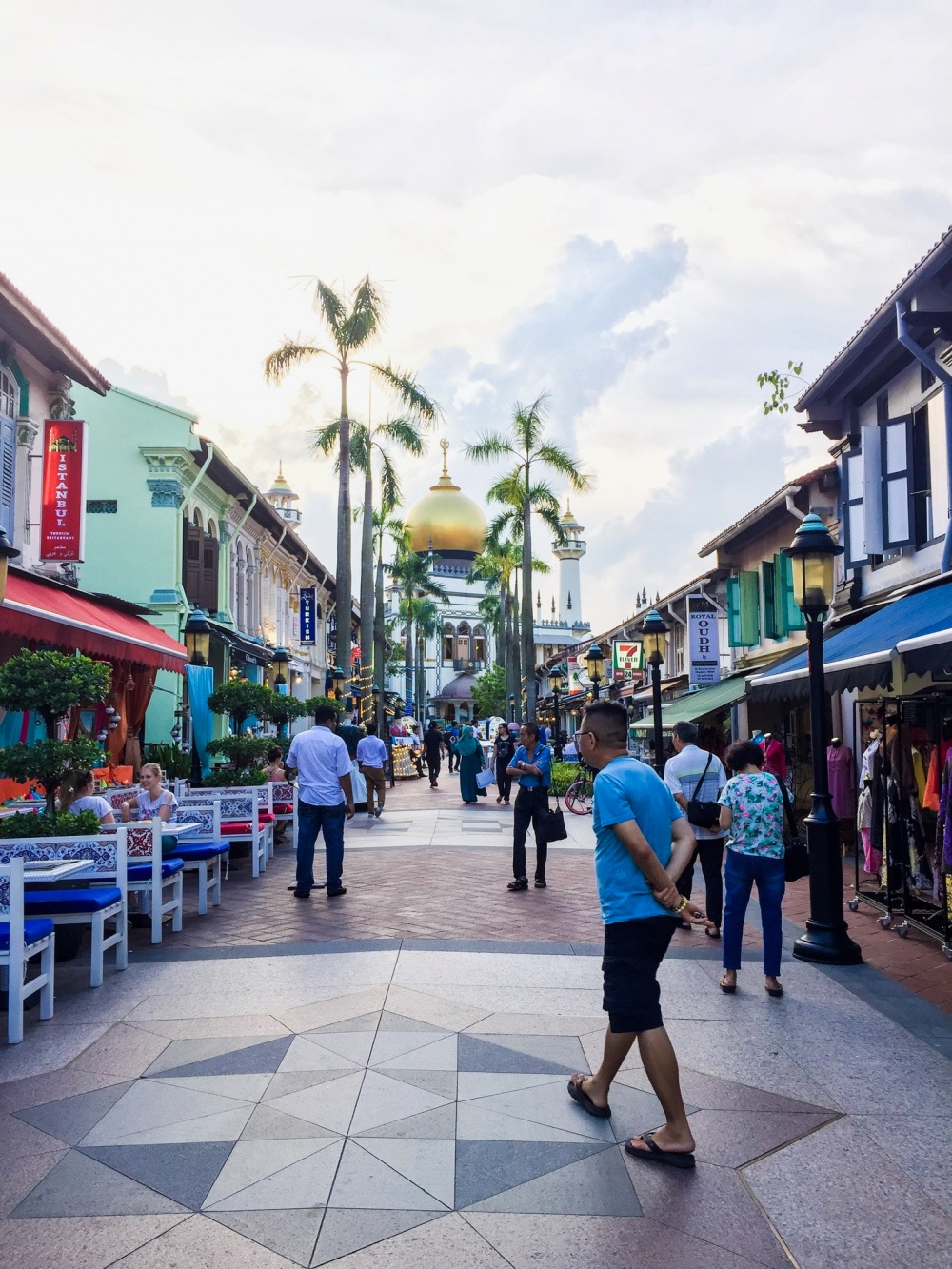 We had fun exploring the area on our first night and enjoyed a very rich Mexican feast. It would not be our last visit… we had a very tasty Lebanese meal another night and I even picked up a take away of humus and pitta bread for lunch one day.

Singapore is pretty much what we expected. It is a more relaxed and multicultural version of Japan with amazing toilets and transport system. It feels very safe and of course full of English so it was easy to feel at home pretty much straight away but something was lacking that I couldn’t quite put my finger on it.

Over the five days we covered as much as possible whilst taking the time to rest when necessary. One of my favourite places we went to was on our first full day- Gardens by the Bay. It is made up of a group of artificial trees with an elevated platform to walk around. They look amazing all grouped together in the sunshine surrounded by greenery in every direction. 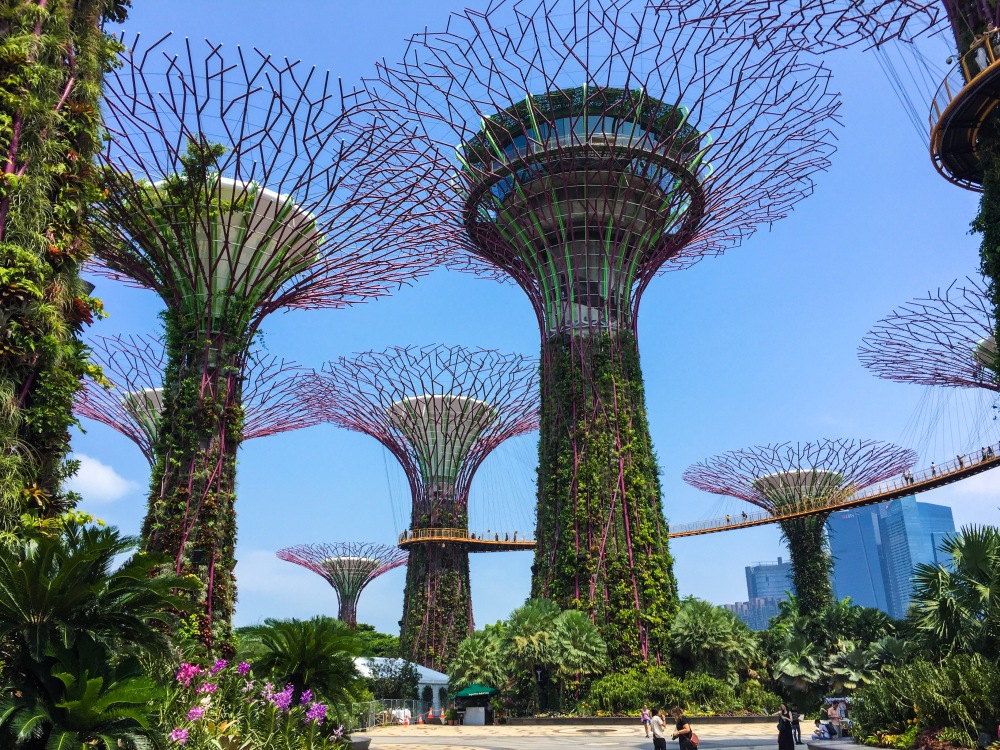 We paid 8 Singapore dollars each and boarded the elevator to the ‘Skyway’. I’ve noticed as I am getting older that I am becoming increasingly afraid of heights. I was doing fine on this occasion until a pretty big family (big meaning many) passed us and the Skywalk clearly started to move. It was then that I realised that it was suspended and that put me on a edge a little bit but not enough to stop enjoying the view of Singapore port and Marina Bay Sands hotel. 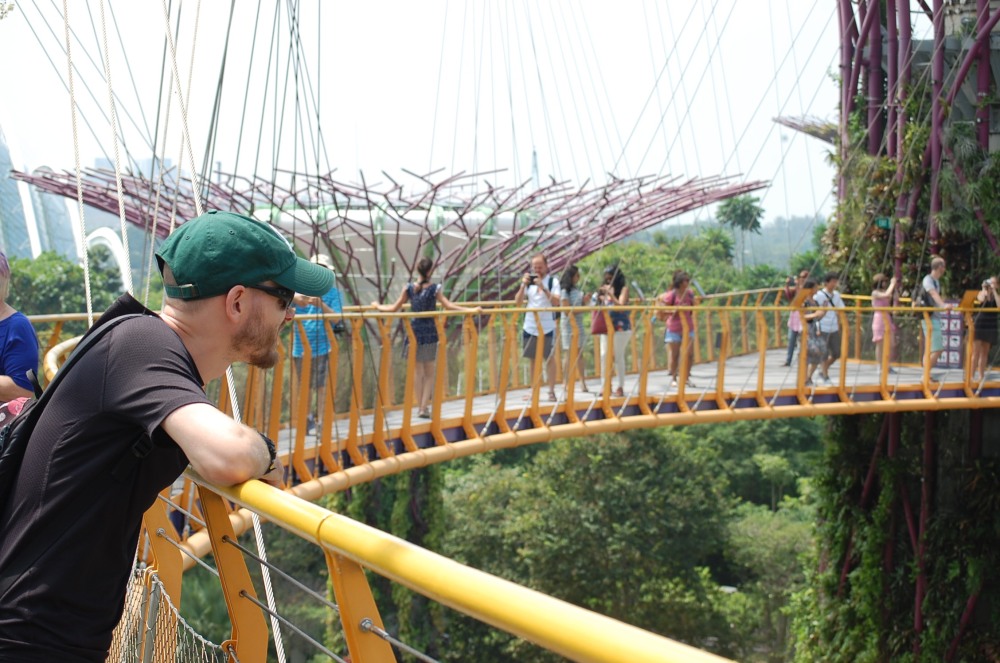 After enjoying the Gardens by the Bay area we walked through the Marina Bay Hotel, which is very impressive by the way, through to the other side to get to see the Merlion statue.

Needless to say it wasn’t a simple route and we found our selves distracted by a DC Comic cafe in a nearby shopping mall. Anyone who knows us, would know that we couldn’t simply just walk past it, we had to eat there and so we did.

Our fast food selection of chicken wings and Wonder Woman’s Lasso fries (basically curly fries) were washed down with our superhero themed drinks. It was a bit of fun to refuel!

One impressive thing about Singapore is the MRT system. We considered buying the Singaporean equivalent to a Suica card or Oyster card but decided for our first trip we would just by a one way ticket. It turns out the cardboard ticket allowed you to reuse the card up to six times before having to get a new one. Very clever! 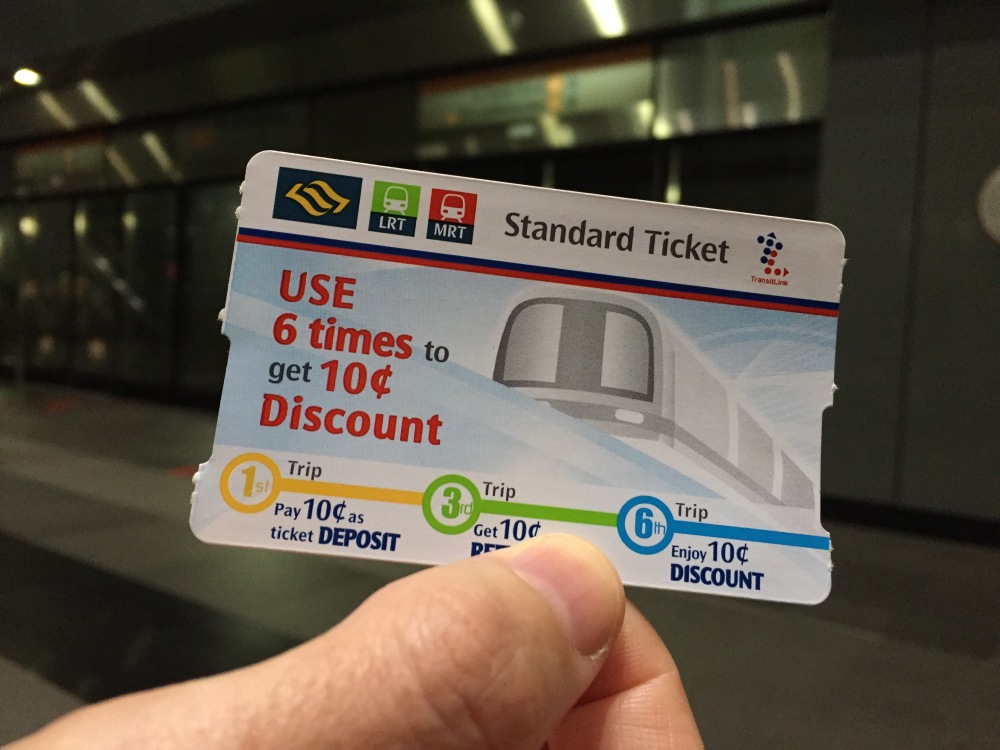 The trains also have little cartoon character all over the place teaching people about train etiquette which I actually got really attached to, especially Stand up Stacey! 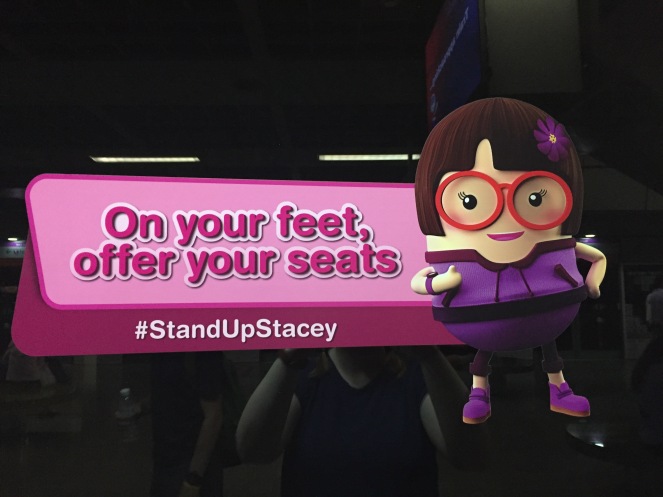 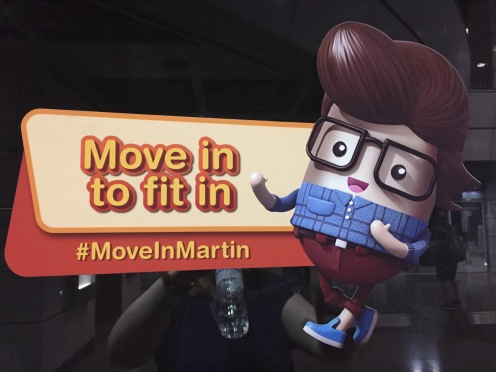 Sentosa Island is a popular tourist destination in Singapore, easily reached by MRT to Harbour Front station then switching to the Sentosa Express monorail. Once on the small two carriage monorail it is obvious that this is an entertainment hub for families. We went twice, once to explore the island and its facilities and the other to enjoy Singapore Universal Studios.

On the first day we bought a 5 point fun card that allowed us to do quite a lot including the aquarium, Madam Tussauds, a live history trip through Singaporean history performed by actors and a Marvel 4D experience.

Our second visit to Sentosa Island was for the much anticipated trip to Universal Studios. We had splurged and booked unlimited express passes (after our dismal LA Universal experience, this was a must). It was GREAT!

At the start of the day our express queues were about 15mins long but by early afternoon they were empty and we were literally walking straight onto the rides. We finally managed to experience the Transformers Ride which has been sitting on my conscience for the past 4 years when I refused to wait two hours in LA. I never stopped Rob waiting in line but he didn’t want to wait that long alone so he missed out and I have felt guilty ever since. Now I was able to relieve that guilt and we even went on it twice!

Singapore Universal is quite small but there are some big rides to entertain you. Rob was a particular fan of the Battlestar Galactica Ride which was two competing roller coasters meaning you had to go on twice to get the full experience. My favourite was the Jurassic Park ride which in this particular park was a circular rapid ride instead of a large log flume. It was nice going on it and not knowing what to expect, even if I did come off with wet feet. Overall it was a great day and finished off with a massive sharing platter at the Hard Rock Cafe!

Besides Sentosa, there is plenty to see and do around Singapore and Clarke Quay is one popular site for food and drinks. We headed there one evening on the recommendation of some work colleagues and ended up having a rather delicious tapas.

Singapore was the stop we were most looking forward to and it is an amazing, relaxing place to visit. There was so much to do, see and it was a much needed stop on our busy trip as we never had to worry about anything but if we are really honest, it was the one country out of the four that we were most disappointed by. If you are looking for a luxurious city break where you can stay in a fancy hotel, eat good food and shop then this is definitely the place for you but this was not that type of holiday for us. We were looking for unique experiences and connections and Singapore was too multicultural for that. I know that might sound awful but the city is split up into specific cultural hubs such as Little India, China Town and Haji Lane, a predominantly muslim area, so it was hard get a feel of a single Singapore. It is also a business city so it is very sanitised and people are not interested in making conversation. You are simply customers, another business transaction so nothing ever went deeper than face value. Don’t get me wrong we really enjoyed our time here, learning the history at the National Museum, eating some amazing food and playing on Sentosa island but overall what Singapore has in diversity and impressive infrastructure it lacks in a unified character and personal charm.

I hope I am wrong and that one day I will be able to come back to enjoy Singapore the way it is supposed to be – with money, and my opinion will change but for now it was a nice break in our Asian exploration.