After our two adventures to Guam and Shimoda, we spent the second part of the summer preparing for the arrival of our next visitors but not without sneaking one last small night away in Tokyo first and this time we chose Odaiba.

We found an amazing deal at the Hilton hotel and took no time at all in booking it. We arrived early on the Tuesday and spent the day exploring the Tokyo Teleport area just off the Rinkai Line. There were plenty of places to browse, mainly shops and restaurants including a very entertaining Hello Kitty restaurant at Divercity. After a hard day shopping (for a new watch strap) we checked into the hotel and chilled out for a bit.

The hotel was beautiful. The floor to ceiling windows behind reception gave the most incredible view of Rainbow Bridge and the best Tokyo skyline I have seen. Even though our room didn’t share the same view, Tokyo Tower, Skytree and Rainbow Bridge all in the same picture definitely created the ultimate scene, especially from the hotel bar. 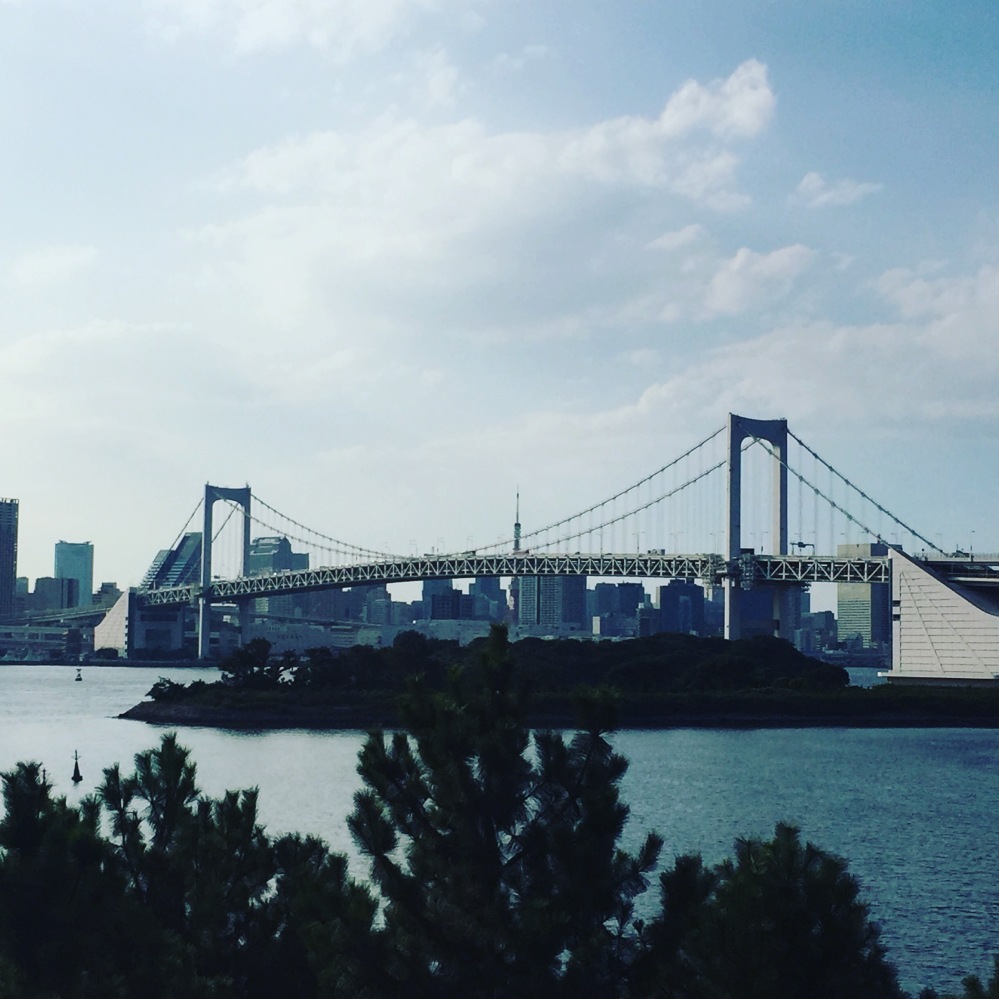 Before heading there at the end of the night, we got dressed up and headed for the Odaiba branch of Gonpachi for tea. It had excellent reviews and turned out to be quite famous. It is known as an Izakaya restaurant which serves small Japanese dishes to eat whilst drinking rather than full meals but this restaurant had the added bonus of sharing the same amazing views as the hotel.

It was delicious and we left feeling full and satisfied. On our way out, we noticed a row of pictures of a range of famous people who had also visited the restaurant including Sylvester Stallone, Lady Gaga and my personal favourite, Keanu Reeves. The reason for such famous visitors? Well it turns out the Shinjuku branch of Gonpachi was made famous as one of the filming locations for Tarantino’s Kill Bill.

We stopped to take some photos on our way back to the bar where we enjoyed some cocktails and a rather interesting chocolate and tofu brownie. However Rob did make a rather quick discovery that mojitos are not for him!

It was a nice end to our own summer before our friends arrived. The Hilton was beautiful and I will not hesitate to book it again in the future.

So the end to our summer was pretty full on with some friends of my husband visiting. We had taken on the challenge of providing a true Japanese experience in just seven days which went a little something like this:

Day 1: Arrival- the hardest day. Overnight flights from the UK to Japan are difficult and most people find it hard to land and fight the instant desire to go straight to bed. Daryl and Shanie not only managed it in impressive style but they also found the energy to try their first taste of Japanese cuisine… Yakiniku.

Day 2 and 3: We were up at 7:30am and heading straight to Shinjuku station where we caught the bus to Kawaguchi Lake. We stayed at the same hotel we stayed at a year ago with my parents and it turns out that Daryl and Shanie loved it just as much as they did. It has traditional ryokan rooms with futons and yukatas to wear, which we finally convinced Rob to do but only if Daryl was willing to take on the onsen experience!!  With the beautiful views of the lake and traditional Kaiseki food it was the perfect Japanese stay! We explored the lake thoroughly during our time there, going up the cable car, climbing through the bat caves and taking a very quiet and uninterrupted stroll through a traditional shrine. On one of our walks, we even captured my first look at fly-boarding which looked pretty impressive.

Day 4: I had a training day at school so it was up to Rob to show them some sights of Tokyo. They had done some research and agreed upon Ueno zoo to see the Pandas, Asakusa and Tokyo Skytree. I met them afterwards at Tokyo Disney Sea using the after 6 pass- a perk of living so close. It was pretty busy and although we didn’t get to go on as many rides as we would have liked, it was well worth watching the husband shout out some impressive profanities as we got drenched on Aquatopia!! It was a good job it was August and the humidity dried us off pretty quickly.

Day 5: We spent the day giving a full on tour of the west and south sides to Tokyo starting with a walk through Harajuku heading from Omotesando station up to Meiji Shrine. We then headed through the backstreets to Shibuya to see the crazy crossing and watch the mad lights. It was then we headed to our hotel, in the Daimon area, to drop the bags off and catch the metro to Roppongi to grab drink at the Hard Rock Cafe (or two if you can down it before the girls get back from the toilet!!). We finished off the day itinerary with a trip up Tokyo Tower. 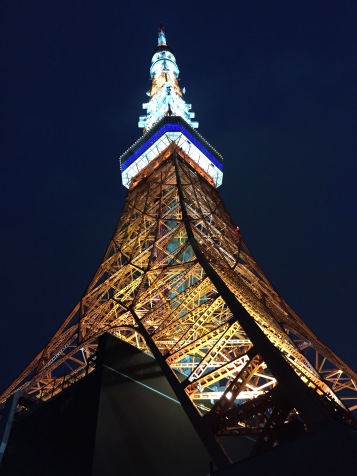 In the evening we decided to take our guests to Odaiba to see my new favourite skyline and enjoy some good food. We finally got a decent picture of the both of us too! 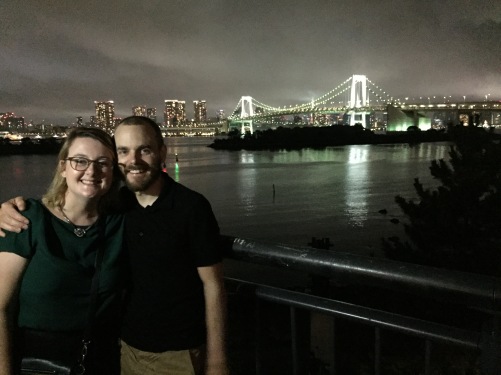 Day 6: We were up early (again!) but this time was to travel out the other side of Tokyo to the temple hotspot that is Kamakura. It was HOT and as the weather was originally forecast for rain, I was just not prepared. I ended up buying a scarf and tying it around my head. I looked ridiculous but at least I walked away from the day without a headache so it was well worth it. Kamakura is famous for the Daibutsu – giant Buddha, which everyone goes to see. However, what most people don’t know is that Hase-dera shrine  just a five minute walk from Enoden Hase station on the electric line also houses two equally beautiful statues of the Buddha. The standing Buddha is just incredible and much bigger than you expect. After our fourth visit, I would say that the statues here are much more beautiful (and less crowded). It is just unfortunate you are not allowed to take any pictures.

Day 7: This was supposed to be my first day back at work but as a typhoon was aiming straight for Tokyo, school was closed. That didn’t stop our guests from spending their last day at Tokyo Disney Land though!! Even though the wind and rain stopped the trains for most of the day, it didn’t stop them enjoying themselves getting on every ride and coming back happy. It’s fair to say the husband and I chose to stay at home.

Day 8: It was definitely time for me to start back at work and it was departure day for our guests. To say we were exhausted would be an understatement but it was well worth it and lots of fun! We just hope we met the challenge we were set and they feel that their whirlwind trip of Japan was what they hoped it would be.

So now we are both back at work but that isn’t stopping us from counting down the days until our next visitors arrive; the in-laws. It will be their first time and we cannot wait to show them where we live and some of the unusual and beautiful things about Japan.