In March our first visitor from home arrived – Lisa. She is a good friend of ours from my husband’s university days. We decided to use her visit as a perfect opportunity to visit Kyoto, the traditional capital of Japan, with a side trip to Koyasan- and what a great idea it was!!!

By the time we had decided to go to Kyoto it was quite late and with the end of March being right in the middle of the popular Sakura season, the most reasonably priced hotel I could find was just outside of the city but what a find!! It was a beautifully designed ryokan located beside the river with quite possibly the most comfy futons. We arrived early on the first day so decided to spend the afternoon exploring the Imperial Palace grounds. It was here that we took part in one of the lesser known Japanese traditions of taking  model style photographs with the blooming cherry blossoms. I don’t think we will be appearing in any magazines in the near future and I cannot see this particular tradition taking off anywhere outside of Japan but it was surprisingly fun to try.

We ended the day watching a light show at Nijo Castle where a beautiful array of images were projected on the walls of the castle to orchestrated music. The only down side was many of the internal exhibitions were closed at night and so we only got to see the outside of the grounds. 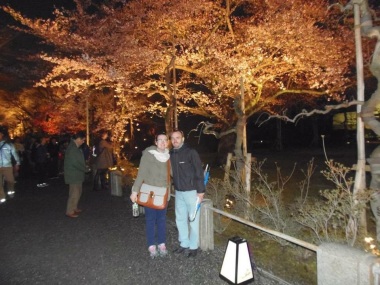 The next day was spent visiting the golden temple – Kinkakuji and Ryoanji Zen Temple in the morning followed by a trip to Gion (to watch the culture show at Gion corner, which is definitely worth a watch). Finally finishing off the day with food and drinks at a traditional Izakaiya. I have to say that Kyoto is a central hub for historical and traditional sights but sadly I found it disappointing at times. I repeatedly found myself wrestling my way around the laid out route between the selfie takers and the tour groups in locations that were designed for meditation and contemplation, trying to ignore the irony of it all. Sometimes it was nice to see the lesser known temples and shrines to find the quiet and the peace that you need to truly appreciate these beautiful pieces of architecture.

On our final day of Kyoto we decided to sneak in a trip to Fushimi-Inari (otherwise known as the park of red gates) before moving onto Koyasan, our next stop. It was an incredible maze of paths snaking up a hill, laced with red gates all the way up to the top. We decided to walk about half the way up due to our lack of time but even that route took longer than we thought with plenty to see and spots to get that all too perfect photograph. It was after this, we were on our way to Koyasan.

Now I have to say that Koyasan, is my favourite place I have visited in Japan (so far). It was roughly a two and a half hour journey from Kyoto Station, taking two trains and a cable car to the world UNESCO site at the top of Mt.Koya. It is an incredibly well organised route, which is clearly sign posted. The cable car works in time with the final train and there is a guide waiting for you at the top to show you to your bus. Because Koyasan is located on top of a mountain, there is limited accommodation, all run by Buddhist monks in traditional ryokans or temples so it is easy for the guides to assist you. We stayed in a ryokan called ‘Sekishoin’, that was run by a small group of monks near the graveyard at the far end of the town. It was the perfect place for exploring the graveyard at night which is in no way as creepy or as sinister as it sounds. The graveyard is so famous that there is a waiting list to be buried there. At the very end of the yard is large temple, which at night is one of the most peaceful and serene places I have ever experienced. Empty and ‘tourist free’, it was literally a breath of fresh air compared to the ram packed sights of Kyoto.

When booking our accommodation at Sekishoin, I was pleased to find that it was half board, as I had read before going, that at night, everything pretty much shuts down. Vegetarianism is a common part of a monks life and so the meals provided were vegetarian and to be honest not something I was particularly looking forward to (I had a pretty large stash of pocky and snacks in my bag just incase) but I was blown away by what was provided. We were seated on the floor in a large dining hall in rows. To start, we were served hot green tea, a bowl of rice and a candle was placed under a soup looking dish to heat up. Then we were free to explore the tray in front of us which was full of various sized dishes and bowls, each containing a colourful array of vegetables prepared, cooked and pickled in every way possible. It was something Heston Blumenthal would be proud to concoct and to my surprise, it was delicious.

The next day we visited some of the temples and shrines around the area. It appeared that the town was in preparation for an important sort of pilgrimage event, so it was relatively quiet. We treated ourselves to a toasted sandwich in a quaint street cafe before leaving Koyasan for home. We had booked flights home from Osaka Kansai to Tokyo which proved much cheaper and a regular future option for my husband and me as we are not eligible for the JR rail pass.

After our trip, I had to go back to work so the rest of Lisa’s travels she had to do by herself. However, we did manage to fit in one trip to the Alice in Wonderland cafe in Ginza (known as Alice in a Labyrinth) before she returned to England. It was an experience trying to find it, which was on the 5th floor of the Sun Building and not very well sign posted but as soon as you exit the lift, you are greeted by a giant open book depicting some of the pages of Lewis Carroll’s famous work. A man dressed in a suit and bowler hat greeted us and showed us to our table which was in a fantastically decorated room. A waitress appeared with a mysterious box and a pair of bunny ears for each of us to wear. Jumping into the spirit of the place will all put them on (even my husband with a matching grumpy expression) and looked at the box which turned out to be the menu. It was all pretty much western style food, given ‘Wonderland’ themed names and descriptions. The waitress reappeared to take our order but not before placing a traditional tea room stand on the table with small cuts of bread and a range of spreads designed (she explained) to represent the bread Alice eats before entering  Wonderland to make her small. It was a nice touch.

The main course was nice and so we decided to treat ourselves to a dessert. Both Lisa and I settled for the creme brûlée which came out so beautifully decorated that I had to give into the social media past time of taking pictures of my food.

After our meal and paid our bill we were given some strawberry tea to take home with us which was supposed to return us to our normal size as we leave ‘Wonderland’. It was surprisingly a lovely evening but a note of warning, the ‘nice touches’ are not for free, with a 600 yen service charge per person added to your bill so just watch out for that.

Overall our first attempt at hosting turned out to be OK. Luckily for us Lisa was well travelled and felt comfortable enough to start exploring parts of Japan solo without us, including a overnight trip to Mt. Fuji and day trip to Hiroshima. Hopefully we will be equally successful with our next hosting adventure in the summer when my parents and brother arrive for 3 weeks. We shall see.

For any questions or you are interested in a collaboration:
s.holtjp@gmail.com

All photos used on this website are the property of TheTravellingHolts unless stated otherwise.